Don’t look at the stranger and jump to conclusions! 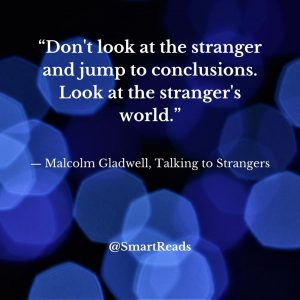 Talking to Strangers studies miscommunication, interactions and assumptions people make when dealing with those that they don’t know. To make his point, Gladwell covers a variety of events and issues, including the arrest and subsequent death of Sandra Bland; British Prime Minister Neville Chamberlain’s interactions with Adolf Hitler; the sex abuse scandal of Larry Nassar; the Cuban mole Ana Montes; the investment scandal of Bernie Madoff; the Jerry Sandusky child sex abuse scandal; the trial of Amanda Knox; the Brock Turner rape case; Sylvia Plath’s death; and the Kansas City preventive patrol experiment. The book opens and closes with an analysis of the Sandra Bland case.

Oprah Winfrey also recommends this book and says, Gladwell’s new book, Talking to Strangers is “What We Should Know About the People We Don’t Know, is another must-read”.

Tony Robbins shared his reading in a podcast (Success Resources) and said, “I’m also reading Talking to Strangers right now, but says “it is a little bit heavy, on a heavier subjects, but I like his way of thinking, of looking at things. He is stimulating””.

Pick your favourite one and share your views with us.