Looking for some philosophy wrapped in fiction? 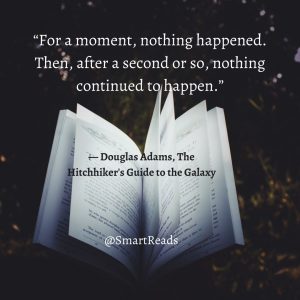 If you are searching for something philosophical but don’t have the stomach for a heaving tome, The Hitchhiker’s Guide to the Galaxy may be the book for you. It is a comedy science fiction series created by Douglas Adams. Originally a radio comedy broadcast on BBC Radio 4 in 1978, it was later adapted to other formats, including stage shows, novels, comic books, a 1981 TV series, a 1984 video game, and 2005 feature film. Here are a few recommendations from our site.

Yuval Noah Harari  says “The Hitchhiker’s Guide to the Galaxy, by Douglas Adams, a book packed with so much good philosophy.”

Also a favourite book of Michael Arrington. He says, “Not sure what you’ll learn from HHGTTG, but it’s one of the funniest series of books of all time and if you haven’t read it you pretty much have to. It’s actually a five book series that’s called a trilogy.”

It’s also a recommended book by Shah Rukh Khan and he mentioned it among the books he likes to read.