Meaning can be found in the bleakest of places 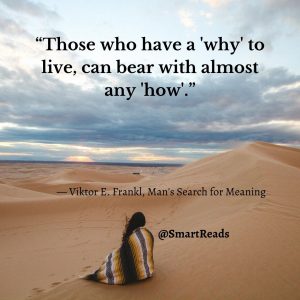 Man’s Search for Meaning by Viktor Frank, is a deeply moving and personal memoir that inspires all who pick it up – is it any surprise that is one of the most sited non-fiction books on SmartReads?

It is a 1946 book by Viktor Frankl chronicling his experiences as a prisoner in Nazi concentration camps during World War II, and describing his psychotherapeutic method, which involved identifying a purpose in life to feel positive about, and then immersively imagining that outcome. According to Frankl, the way a prisoner imagined the future affected his longevity. The book intends to answer the question “How was everyday life in a concentration camp reflected in the mind of the average prisoner?” Part One constitutes Frankl’s analysis of his experiences in the concentration camps, while Part Two introduces his ideas of meaning and his theory called logotherapy.

Tony Robbins praises the book saying. “I don’t give a damn how rich you are financially or how abundant you are with your family or love, we all experience extreme stress in our life at some point,” Robbins says. “It’s the ultimate equalizer. If it’s not you, it will be someone in your family, and so the ability to find meaning in the most difficult times, I think, is one of the most important skills of life, and there’s probably not a greater example than that book.”

Also a recommended book by Tom Bilyeu. “If you haven’t read Man’s Search for Meaning by Viktor Frankl, you must!! Life changing,” he says.

Jimmy Fallon is a die heart fan of this book and he recommends all to have this in their library. He says, “this is a book I try to read every couple of years. It’s one of the most inspirational books ever written. What is the meaning of life? What do you have when you think you have nothing? Amazing and heartbreaking stories. This is a book that should be in everyone’s library.”

PewDiePie reveals his secret of inspiration. “I suddenly feel better equipped for in case–I know that sounds a bit weird to say, but in case something really bad happens, I feel like from reading this book, I’m better equipped to know how to handle it. That’s a bit naive to say, but I really think there are some important stuff in here.”