Are you looking to level-up in your field? 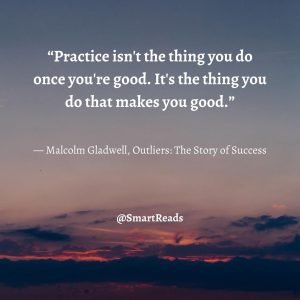 Are you looking to level-up in your field? Outliers: The Story of Success may help you in your quest for improvement. It’s the third non-fiction book written by Malcolm Gladwell and he examines the factors that contribute to high levels of success. To support his thesis, he examines why the majority of Canadian ice hockey players are born in the first few months of the calendar year, how Microsoft co-founder Bill Gates achieved his extreme wealth, how the Beatles became one of the most successful musical acts in human history.

Gladwell repeatedly mentions the “10,000-Hour Rule”, claiming that the key to achieving world-class expertise in any skill, is a matter of practicing in  the correct way. The book debuted at number one on the bestseller lists for The New York Times and The Globe and Mail, holding the position on the former for eleven consecutive weeks.

Finneas recommends this book and says, “I read outliers when I was 16- it changed my life and I became obsessed with the idea that 10 years and 10 thousand hours was the amount of time necessary to truly master something. I started writing songs at 12 and I’ve been writing them every day since. I’m 22 now and good LORD. I don’t feel like the master of anything- but I’ve gotten better, that’s for sure. And that’s all you should ever aim for. Getting a little bit better every day.”

Will Smith says of the book, “I was reading Malcolm Gladwell’s Outliers, and he talks about the concept of 10,000 hours. That you don’t really settle into any level of mastery until 10,000 hours, and I feel like I’ve just completed my 10,000 hours of story structure and filmmaking.”

Also a favourite of Shah Rukh Khan, he says, ” loads of times, it is these kinds of books that make it to the top seller position – like the Outliers. Of course, the Outliers is very well written.”