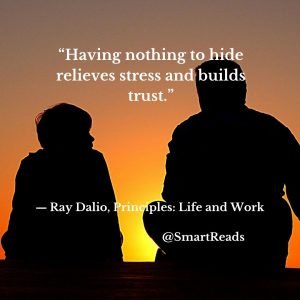 What are your principles at your work or in life? We all follow some rules in our life. “Success leaves clues. Learn the principles that guided Ray Dalio in his life, business, and his financial success.” states Tony Robbins’s website about his favourite book Principles.

Principles: Life & Work is a 2017 book by hedge fund manager Ray Dalio based on principles he had developed while running Bridgewater Associates. These Principles for Success were also made available as an ultra mini-series adventure by the author.

In Principles, Dalio shares what he’s learned over the course of his remarkable career. He argues that life, management, economics, and investing can all be systemized into rules and understood like machines. The book’s hundreds of practical lessons, which are built around his cornerstones of “radical truth” and “radical transparency,” include Dalio laying out the most effective ways for individuals and organizations to make decisions, approach challenges, and build strong teams.

Also a favourite book of Tom Bilyeu, he mentioned it on twitter with a tweet, “I’m reading @RayDalio ‘s book, Principles.”

When Ray Dalio tweeted a picture of the book page and asked, “If you’ve read the book, what principles have you found to be the most valuable?”

“So many to pick from in this amazing book. I’m focused on radical truth and radical transparency. Toughest and most uncomfortable to do, both personally and through work, but also the most freeing and impactful. I’ve committed to weekly progress,” Jack Dorsey replied.

Also a Recommended book by Mark Cuban and he says , “billionaire Ray Dalio’s book teaches the greatest skill you need to succeed. “