Best Business books that will make you a Millionaire 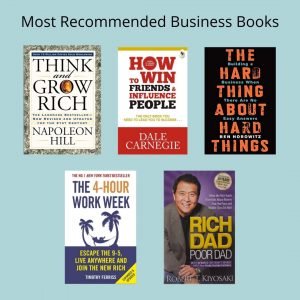 No matter your age, we could all stand to improve ourselves.You have big dreams, visions and goals; you want to be successful – but how best to proceed?

Probably the best place to start is to seek the advice of proven thinkers, creators and leaders.  If you have a growth mindset and are humble enough to recognise your knowledge gaps, and are willing to put in the time to improve yourself, then let us help you find the books that will help you get to where you want to go. These books are all from our masterlist of favourite books of some of the greatest minds on the planet. So here goes:

It was written by Napoleon Hill in 1937 and promoted as a personal development and self-improvement book. He claimed to be inspired by a suggestion from business magnate and later-philanthropist Andrew Carnegie.

Think and Grow Rich is based on Hill’s earlier work The Law of Success, said to be the result of more than twenty years of study of many individuals who had amassed personal fortunes.

Hill studied their habits and drew some 16 “laws” to be applied to achieve success. Think and Grow Rich condenses them, providing the reader with 13 principles in the form of a “Philosophy of Achievement”.

Favourite book of Bruce Lee, he gave it a place on his bookshelf. While Bruce’s library contained thousands of volumes, they were primarily centered in a handful of genres: philosophy (the vast majority), martial arts (and other fighting disciplines), and self-help.

Also a favourite of Daymond John, when he was 16, he read Napoleon Hill’s classic business book “Think and Grow Rich,” and it changed his life. Ir reinforced what his parents taught him and inspired him to set lofty goals.

“The main take away from that was goal-setting,” John says. “It was the fact that if you don’t set a specific goal, then how can you expect to hit it?”

It is a self-help book written by Dale Carnegie, published in 1936. Over 30 million copies have been sold worldwide, making it one of the best-selling books of all time. In 2011, it was number 19 on Time Magazine’s list of the 100 most influential books.

“Archaic references and overweening titles to the side, it’s actually a great guide to leadership and salesmanship,” says Strauss Zelnick for his favourite book.

Daymond John says that he’s a fan of all of Carnegie’s books. Carnegie was a contemporary of Hill’s and his writings on how to maximize success have had just as much longevity. And Warren Buffett famously took Carnegie’s class on the subject when he was 20 and still has the diploma he received for it in his office.

In The Hard Thing About Hard Things, Ben Horowitz, cofounder of Andreessen Horowitz and one of Silicon Valley’s most respected and experienced entrepreneurs, draws on his own story of founding, running, selling, buying, managing, and investing in technology companies to offer essential advice and practical wisdom for navigating the toughest problems business schools don’t cover.

Recommended by Michael Dell, he says this book is one of his faves because it’s loaded with great lessons and advice from a successful leader and innovator.

Also a favourite book of Danielle Morrill, she mentioned it on her website while sharing a reading list of her favourites.

It deals with what Ferriss refers to as “lifestyle design” and repudiates the traditional “deferred” life plan in which people work grueling hours and take few vacations for decades and save money in order to relax after retirement.

With Tim Ferriss’ guide, you can break free of the 9-5 workweek for a life full of travel, adventure, and whatever else it is that you want to do. His guide will help you eliminate much of your workload and make more time for the things that are most important to you. He is full of tricks for you to use at your own disposal.

“Taught me better ways to manage my time and the value of not making myself too busy,” says Mark Bell for his favourite read.

Also a favourite book of Maurice Ashley. He says, “Made me ditch the average life in search of one with complete flexibility and freedom to live life on my terms.”

One of Will Smith’s favourite books. He mentioned sharing this book with his son.

Rich Dad Poor Dad, one of Daymond John’s favourite books. When he was asked in an interview, “Are there other business books that have changed your life?”

John said, “There are the normal ones that everybody loves. There would be “Rich Dad Poor Dad,” “Who moved my cheese?” I love all the Dale Carnegie books; “The one minute manager.” I love newer ones like “Blue ocean Strategy” and all the “Freaknomics” books.