Guns, Germs, and Steel: The Fates of Human Societies 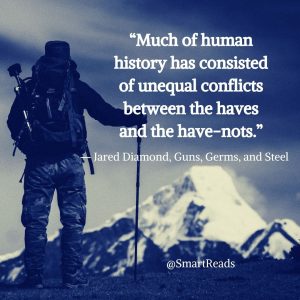 Guns, Germs, and Steel, is among the favourite books of Bill Gates  and Simon Sinek.Previously titled Guns, Germs and Steel: A Short History of Everybody for the Last 13,000 Years.

It is a 1997 transdisciplinary non-fiction book by Jared Diamond. In 1998, Guns, Germs, and Steel won the Pulitzer Prize for general nonfiction and the Aventis Prize for Best Science Book. A documentary based on the book, and produced by the National Geographic Society, was broadcast July 2005.

The book attempts to explain why Eurasian and North African civilizations have survived and conquered others, while arguing against the idea that Eurasian hegemony is due to any form of Eurasian intellectual, moral, or inherent genetic superiority. Diamond argues that the gaps in power and technology between human societies originate primarily in environmental differences, which are amplified by various positive feedback loops.

“It offers us a new and remarkably simple way of looking at our world,” says Simon Sinek.

Also a favourite of Joe Rogan, he mentioned on his twitter account that “Guns Germs and Steel is an amazing book.”

Bill Gates has included it in his reading list and says, “Fascinating…. Lays a foundation for understanding human history.”