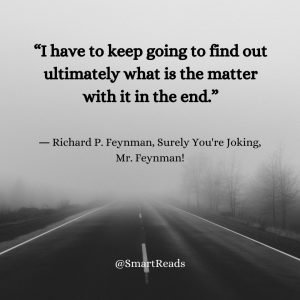 Do you like humorous reading? Take your hands on Surely You’re Joking, Mr. Feynman! , favourite of Peter Attia and Naval Ravikant and go through the life of Nobel Prizewinning physicist Richard Feynman.

Once, Peter Attia has been asked in an interview, “what book have you recommended the most to friends and family?”

It’s an edited collection of reminiscences by the Nobel Prize-winning physicist Richard Feynman. The book, released in 1985, covers a variety of instances in Feynman’s life. The anecdotes in the book are based on recorded audio conversations that Feynman had with his close friend and drumming partner Ralph Leighton.

The book has many stories which are lighthearted in tone, such as his fascination with safe-cracking, studying various languages, participating with groups of people who share different interests (such as biology or philosophy), and ventures into art and samba music.

Other stories cover more serious material, including his work on the Manhattan Project (during which his first wife Arline Greenbaum died of tuberculosis) and his critique of the science education system in Brazil. The section “Monster Minds” describes his slightly nervous presentation of his graduate work on the Wheeler–Feynman absorber theory in front of Albert Einstein, Wolfgang Pauli, Henry Norris Russell, John von Neumann, and other major scientists of the time.

Naval Ravikant recommends this book and says, “learn about the inner mindset and external state of someone who was absolutely brilliant.”