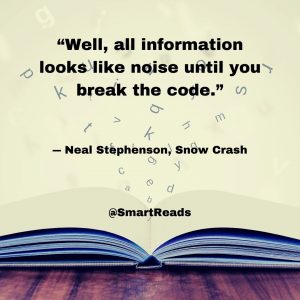 Do you like science fiction or fictional characters? Snow Crash, recommended by Sergey Brin and Larry Page may be your next great read.

It is a science fiction novel by American writer Neal Stephenson, published in 1992. Like many of Stephenson’s novels, it covers history, linguistics, anthropology, archaeology, religion, computer science, politics, cryptography, memetics and philosophy.

The story opens in Los Angeles in the 21st century, an unspecified number of years after a worldwide economic collapse. Los Angeles is no longer part of the United States, as the US federal government has ceded most of its power and territory to private organizations and entrepreneurs. Franchising, individual sovereignty, and private vehicles reign supreme. Mercenary armies compete for national defense contracts while private security guards preserve the peace in sovereign, gated housing developments. Highway companies compete to attract drivers to their roads and all mail delivery is by hired courier. The remnants of government maintain authority only in isolated compounds where they do tedious make-work that is, by and large, irrelevant to the society around them.

“Ten years ahead of the time anticipated what’s going to happen and I find it very interesting,” says Sergey Brin about his favourite book.

Larry Page added it to his bookshelf and one of Ryan Shea‘s 4 answers to “what is the book (or books) you’ve given most as a gift?”