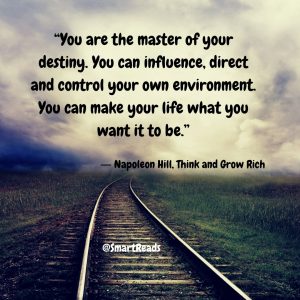 It was written by Napoleon Hill in 1937 and promoted as a personal development and self-improvement book. He claimed to be inspired by a suggestion from business magnate and later-philanthropist Andrew Carnegie.

Think and Grow Rich is based on Hill’s earlier work The Law of Success, said to be the result of more than twenty years of study of many individuals who had amassed personal fortunes.

Hill studied their habits and drew some 16 “laws” to be applied to achieve success. Think and Grow Rich condenses them, providing the reader with 13 principles in the form of a “Philosophy of Achievement”.

Favourite book of Bruce Lee, he gave it a place on his bookshelf. While Bruce’s library contained thousands of volumes, they were primarily centered in a handful of genres: philosophy (the vast majority), martial arts (and other fighting disciplines), and self-help.

Also a favourite of Daymond John, when he was 16, he read Napoleon Hill’s classic business book “Think and Grow Rich,” and it changed his life. Ir reinforced what his parents taught him and inspired him to set lofty goals.

“The main take away from that was goal-setting,” John says. “It was the fact that if you don’t set a specific goal, then how can you expect to hit it?”