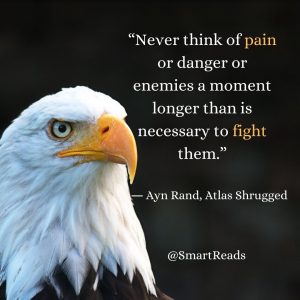 Here I’m going to introduce you with a novel which is a multi genre novel. Yeah, Atlas Shrugged, recommended by Brian Armstrong,Travis Kalanick, is a novel where you would feel science fiction, mystery, and romance at one place.

“Celebrate the creators in the world (even when they struggle). They may be more valuable than we think,” says Brian Armstrong about the book.

Atlas Shrugged is a 1957 novel by Ayn Rand. Rand’s fourth and final novel, it was also her longest, and the one she considered to be her magnum opus in the realm of fiction writing. Atlas Shrugged includes elements of science fiction, mystery, and romance, and it contains Rand’s most extensive statement of objectivism in any of her works of fiction. The theme of Atlas Shrugged, as Rand described it, is “the role of man’s mind in existence”. The book explores a number of philosophical themes from which Rand would subsequently develop Objectivism. In doing so, it expresses the advocacy of reason, individualism, and capitalism, and depicts what Rand saw to be the failures of governmental coercion.

Atlas Shrugged is set in a dystopian United States at an unspecified time, in which the country has a “National Legislature” instead of Congress and a “Head of State” instead of a President. The United States also appears to be approaching an economic collapse, with widespread shortages, constant business failures, and severely decreased productivity.

It’s on the “books read” section of Ev Williams‘ GoodReads profile and Travis Kalanick mentioned this in a Washington Post interview.

Also recommended by Amelia Boone. She says, “when I read this book in my teens, Dagny Taggart’s character spoke to me on a level I’d never experienced with any other novel.”